Last week I went to @media. Fantasic conference, albeit with two minor drawbacks. The first is that it’s nearly impossible to search for on Google, which is a bit embarrassing considering that it’s a conference for webby people. The second is that I had to spend two days looking like this: 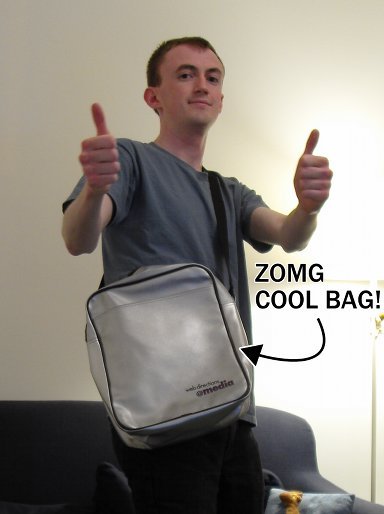 OK, so I don’t look much worse than usual, but trust me – that bag is hideous. Really chaps, it’s silver. Half of the attendees were designers and I’m told that those guys have some taste.

Given that I’m the sort of person that reads W3C specifications for fun, many of the talks were, for me, more reassuring than educational; reinforcing what I’ve already been doing rather than changing my outlook dramatically. Andy Clarke fell well into this category with “Hardboiled Web Design”.

There’s a gaping capability chasm between Safari 5, which has CSS 3D transforms, CSS animations, fast JavaScript, and a host of other goodies; and IE 6, which is shit. Most designers seem content to jump straight into that chasm by designing for the lowest common denominator and spending weeks getting their site to look exactly the same in every browser. Andy’s point was that this is a terrible waste of an opportunity. If your site looks and feels the same in Safari 5 as it does in IE6, you’re doing something seriously wrong. He punctuated his talk by swigging from a whisky bottle (at 9:30 in the morning), as if to underline his general awesomeness.

Brendan Eich’s deeply technical talk was rather foolishly scheduled for 9:10 on the Thursday morning. As a result, it didn’t seem to be all that well received, which is a huge shame. I got up at 5:30 that morning in order to arrive on time, and I’m sure I wasn’t the only one. The room was full of decidedly sleepy people.

Nevertheless, it was a great talk. I haven’t been keeping up with the progress of EcmaScript Harmony, so this talk was one of the more informative for me. I came away from the talk with real hope that we may soon get a really good, mature language to work with in the browser. Then I went and drank a large cup of black coffee.

Aral Balkan gave an incredibly inspiring talk about designing applications to not only be both usable and useful, but also to induce pleasure and joy in their users. The techniques he described are fairly well known in the field of game design (although still not used nearly enough), but in applications they are remarkably rare. This is despite the fact that they make the difference between apps that delight the user and apps that merely fail to annoy them.

The latter half of Aral’s talk came across to some people as a thinly-disguised advertisement for his iPhone app, Feathers. I’m going to overlook it on the grounds that there aren’t many applications that could have been used to illustrate his point. Adium is one, but I can’t think of any others. I’m also going to ignore my discomfort regarding the inaccessible Unicode gobbledegook that Feathers users post to Twitter, since nobody posts anything useful to Twitter anyway.

There were also various sponsors exhibiting. I wasn’t all that interested in listening to marketing spiel, so my interaction with these fellows was mostly limited to acquiring what freebies I could and then making good my escape. It seems that I needn’t have worried. I eventually got talking to a nice chap from Microsoft and he didn’t say a word about IE 9 (probably because he doesn’t work on it), although he did tell me about his work on data cubes, which I confess is something I’d never heard of. He also drew for me a rather stylish giraffe on the IE 9 whiteboard. 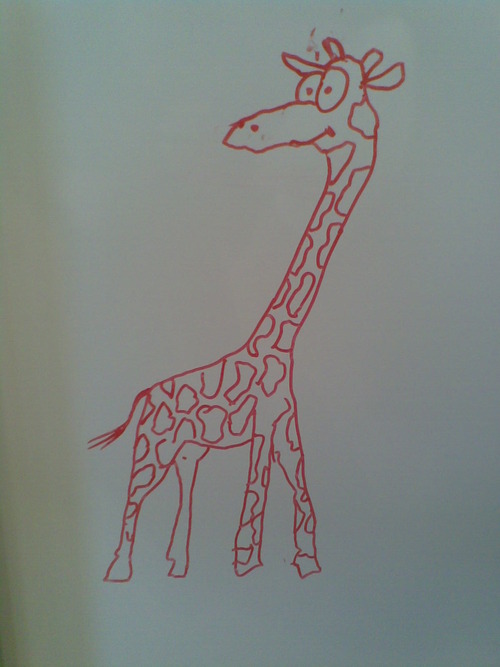 Yes, the Microsoft guys exhibited with an actual, physical whiteboard. Actually, everyone exhibited with whiteboards, so presumably they were provided by the conference organisers, but none of them saw as much use as the Microsoft ones did. Participants were invited to try out the IE 9 Preview and write their comments up on the board; although the trying-out-IE9 part wasn’t mandatory. Predictably, within a couple of hours, one of the nation’s wittiest comedians changed an r within Explorer to a d, and it stayed that way for the rest of the conference. It would have been me if that other guy hadn’t beaten me to it. 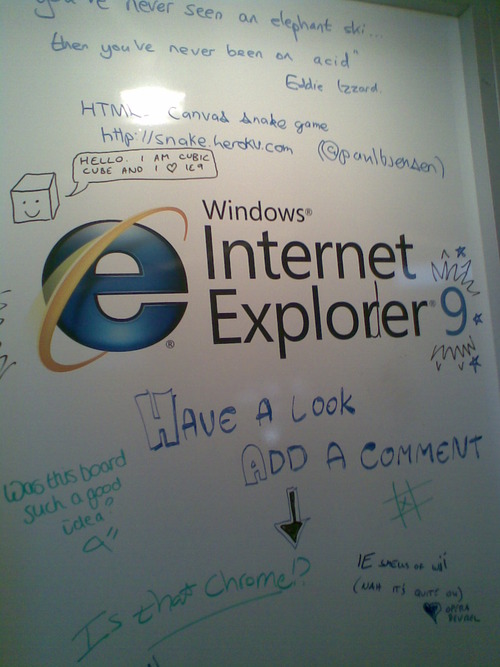 It’s nice to see that Microsoft don’t take themselves too seriously. Kudos to the marketing guy who came up with the idea. Many of the comments (“is that Chrome!?”) were remarkably positive given Microsoft’s history, but then the IE9 preview is very, very good.

Microsoft adopted another marketing technique that – it must be admitted – was quite innovative. They provided attendees with cheap boiled sweets and cola bottles, which were provided in brown paper bags with ‘ietestdrive.com’ written on them using whiteboard markers. Perhaps the recession is biting hard, or perhaps Microsoft – the vendor with the largest browser market share by far – is trying to play the underdog. IE9 or not, they’d better get used to it. Thanks for the sweets though, guys. They were actually quite tasty.